For the past few weeks, my husband Dave has been taking advantage of this new blog thing by requesting different foods — cheesecake being one of them. Now, I love cheesecake, but I hate making it. Having a 9-inch cheesecake in the house is just too much for two people to handle. In fact, that very situation reminds me of this classic episode of Friends.

“It was cheesecake. It was fine. It had a buttery, crumbly, graham cracker crust with a very rich, yet light cream cheese filling.”

Soon enough, I had cheesecake on the brain, too. But rather than making a full-sized cheesecake, I decided to try downsizing the classic recipe. While digging around and doing some research, I discovered a nifty little trick — using vanilla wafers as the crust instead of graham cracker crumbs and butter. Pretty cool! Here’s how it turned out: 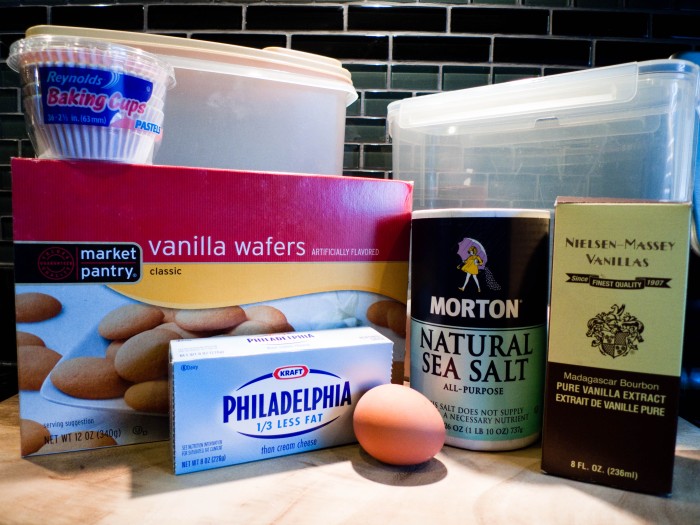 I’m pretty happy with how they turned out. I was a little skeptical about the vanilla wafers, but the texture ended up being pretty nice — very similar to a graham cracker crust. And although these cheesecakes are smaller, they’re a nice substitute when you don’t want to make an entire 9-inch cheesecake. But let’s face it — nothing beats running your fork through a thick, creamy, deliciously large slice of the real thing.

If you wanted to dress up your mini cheesecakes, you could always top them with fresh fruit, fruit jam or caramel sauce. For chocolate cheesecake, incorporate 1 tablespoon of cocoa powder into the cheesecake mixture before pouring into muffin cups. However, I’m a cheesecake purist and prefer it plain.

What’s your favorite type of cheesecake?