You guys. I’ve held off on posting Part Two of my Ben & Jerry’s experience until now for a very specific and very special reason.

(No, the reason isn’t laziness. But thanks.)

TODAY IS FREE CONE DAY AT BEN & JERRY’S SCOOP SHOPS! Every year since 1979 (the year B&Js was founded), free cone day has been their way of saying ‘thank you’ to the community for their support. So get after it and go get yourself a free cone! Check the link for hours and locations near you.

And now, back to your scheduled programming.

I realize that  I really left you hanging last time by not telling you who the big winner of our ice cream competition was. But first, let me remind you about Polar Vortex — my group’s brilliant creation.

Akila from The Road Forks, ME!, Vanessa from French Foodie Mom, and Tammy from Chicago Bites

And, after all these weeks of suspense, I’m proud to announce that — despite some really stiff competition — Polar Vortex tied for first and will (hopefully) be making a guest appearance at Ben & Jerry’s Scoop Shops in Chicago and Atlanta sometime soon. Details are still TBD, but keep it here and I’ll be sure to update you so you can try Polar Vortex for yourself.

The next day, we really dove into where Ben & Jerry’s ice cream comes from. Our first stop was at St. Albans Co-Op, a member-owned dairy farm from which Ben & Jerry’s gets their milk (and has since 1986). St. Albans consists of 410 individual farms that produce three million pounds of milk each day. That’s a lot of milk.

Once the raw whole milk has been separated into heavy cream and condensed milk cream, it gets sent by tanker truck to one of two Ben & Jerry’s factories. The main factory, in Waterbury, Vermont, was the next stop on our trip, where we got to learn more about ice cream production, quality control and more.

During the cutting process, whole pints are either cut into quarters (most pints) or slices (Core pints) to get a view of the product and how well it’s being dispensed into the pints. You can see below why the Core pints are cut into slices — you can clearly see the two different ice creams, as well as the injected Core. Pretty cool. 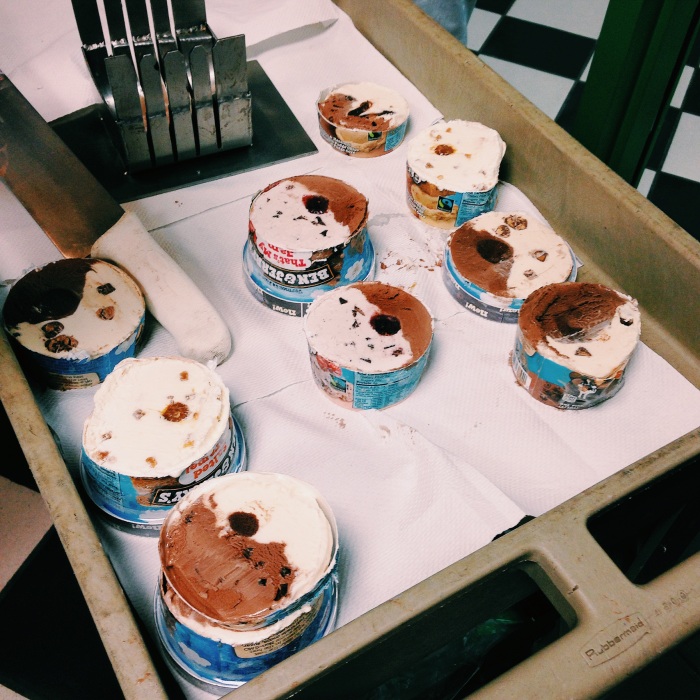 We also got to do our own version of quality control on all four new Core flavors. It’s a tough job, but someone’s gotta do it. 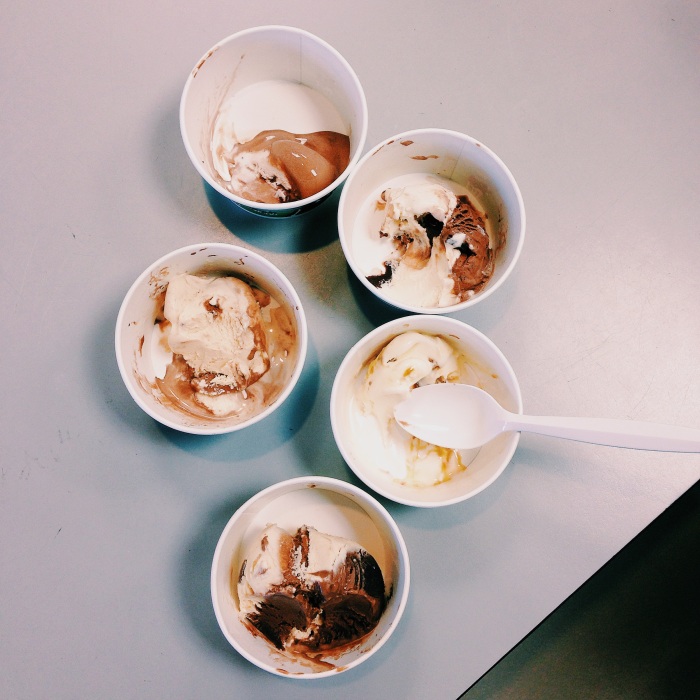 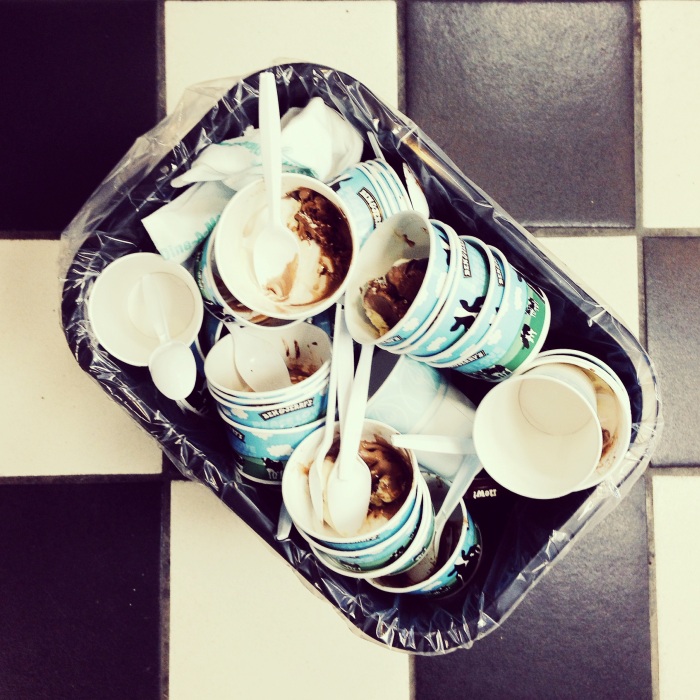 And then we went snowshoeing to burn it all off. (Or at least some of it.) 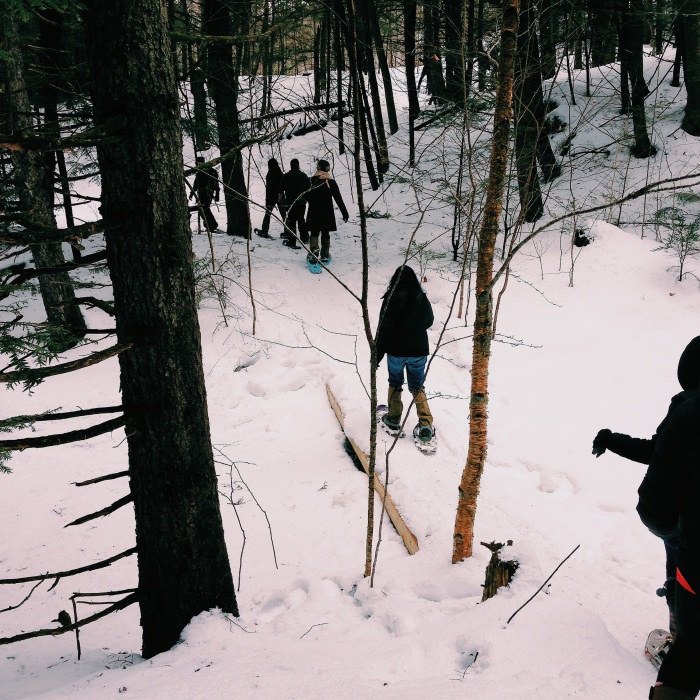 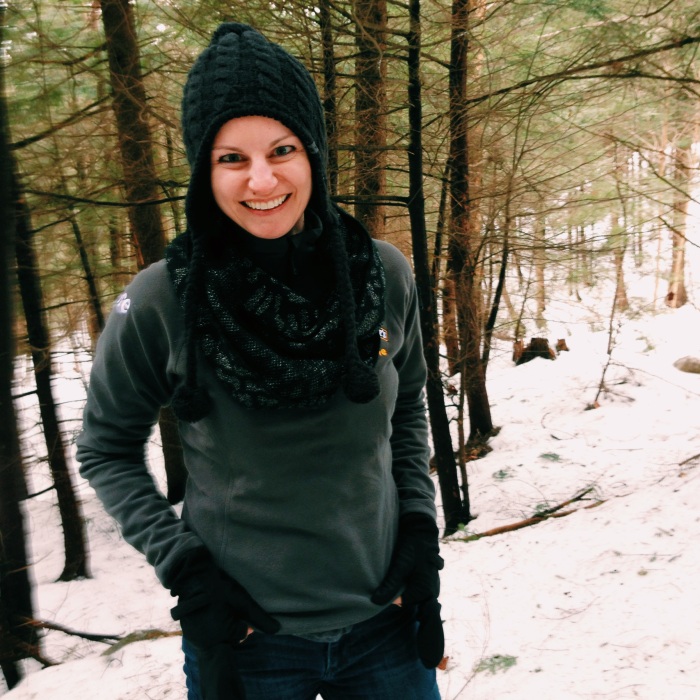 Afterwards, we went out for our final meal in Vermont as a group — little did we know that we’d be joined by Ben & Jerry themselves. It was a surreal experience being able to meet them, and let me just say that they’re absolutely the two nicest, most socially responsible guys ever. (In fact, check out Ben’s initiative, Stamp Stampede — a grassroots campaign that strives to #getmoneyout of politics). And yes, they’re still friends. Aren’t they awesome? 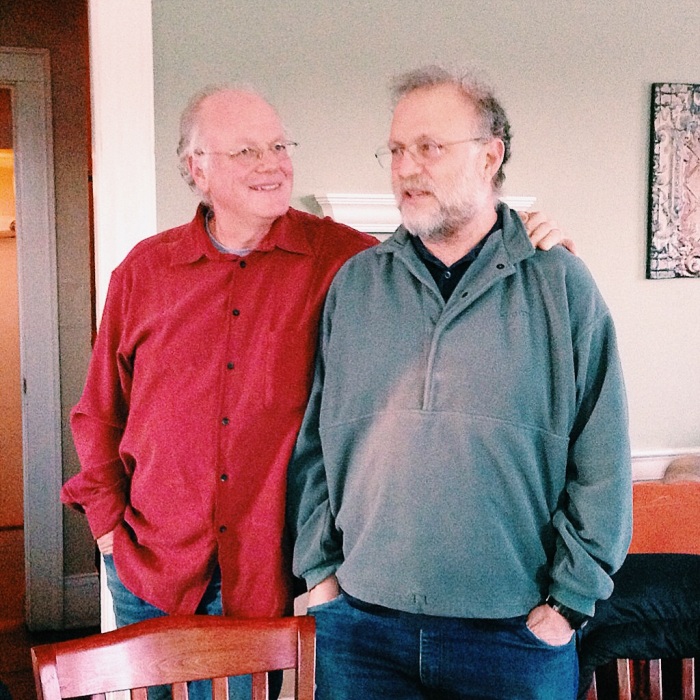 I had the most amazing time on this trip and am still pinching myself over the fact that it actually happened. I visited a great place, met some great people, and left with a whole new perspective of what it means to run a successful, values-based business in today’s world (YES! it is possible).

Until next time, Vermont. Thanks for being such a generous host. XOXO

4 thoughts on “My Experience at Ben & Jerry’s, Part Two”